Starting in highschool, I was discouraged from making paintings that were meant to be ‘hung over the couch’. While I’m grateful for the shove my teachers gave me to step into the conceptual realms of art practice, I’ve been feeling the need to decorate and turn my works into ornaments meant to be admired for their beauty creeping up on me. With a little bit of glitter or colourful fabric, many of the women in my family can make anything from a dinner plate to a road sign look pretty. I have grown up with a colourful Pakistani background, but I have lived and studied in Canada. Therefore, I define myself, and want my work to be defined, as both Pakistani and Canadian. So I’m not too surprised that the yearning to combine conceptual art and beautiful imagery, and not see them as separate entities, has finally taken over.

Unfortunately, decorative art, which is associated with craft, is often seen as primitive, feminine and ‘other’ in the Western art world.   Markowitz explains how this hierarchy between fine art and craft affects our society at a larger scale:

Some critics, with good reason, claim that this difference [between art and craft] in evaluative meaning reflects our culture’s elitist values: what white European men make is dignified by the label “art,” while what everyone else makes counts only as craft [and] once classified as craft, a work has trouble counting not only as great art, but as any sort of art at all. (55)

The relationship between craft and fine art can then easily be seen as an analogy of the inequality between not just genres and mediums, but also gender and cultures.

To find a basis for my work, I have been researching artists and movements that have overcome this class struggle between art and craft. The Patterns and Decoration artists, as well as contemporary artists like Beatriz Milhazes and Yinka Shonibare, MBE are inspiring examples. The P&D movement started in the mid 1970s in opposition to Minimalism. Unlike the Minimalists, the P&D artists celebrated ornamentation and beauty and were inspired by Feminism and multiculturalism. Balduccy writes: “Not only did [P&D artists] utilize floral and other decorative motifs associated with femininity and domesticity, but they radically questioned how art was defined by producing their works at a time when the art scene was dominated by male artists focused on abstraction and minimalism” (44). These artists broke through the boundaries that separated art and craft by incorporating techniques and patterns associated with femininity and domesticity into their works.

Like the P&D artists , Milhazes and Shonibare also fill their works with patterns. But instead of juxtaposing patterns from other cultures into their work, they include patterns that they believe are part of their own cultural identity. Milhazes’ paintings are inspired by the bold colours of Matisse and Op art. They overflow with crafts, motifs and colours inspired by her Brazilian culture (see fig. 1). In her 2006 interview with Achim Drucks, she declares that she doesn’t “have any fear of beauty”. And her fearlessness is probably why her bold and vibrant paintings are so  successful. Shonibare, on the other hand, uses motifs he finds in ‘African’ fabrics (Dutch wax-printed cotton), which is actually “printed on Indonesian batik, manufactured in Netherlands, Britain and other countries (including some in West Africa) and then exported to west Africa, where it is a popular, but foreign, commodity” (Hynes 60).  He uses these patterns in playful ways to comment on colonialism and postcolonialism, as well as question the authenticity cultural and national identities (see fig. 2). Like the P&D artists, both Milhazes and Shonibare use patterns and decorations  to broaden identity politics. Through the creation of ornamental yet conceptual art, they are able to level craft with fine arts, feminine with masculine and foreign with native.

While these artists are inspirational, for me to equalize craft and fine arts, I still needed to understand where the words ‘beautiful’ and ‘decorative’ fit within Canadian art history. So I started my research on Canadian artists. Since I’m very interested in landscapes in my own work, my research very quickly gravitated towards The Group of Seven. The Group was made up of seven famous and highly celebrated Canadian landscape painters from the 1920s and 30s. While their paintings seem harmless on the surface, my research has revealed multiple problems their selectively painted landscapes represent. In his book, Beyond Wilderness, Peter White states:

[W]hat the Group actually depicted in their signature painting was, for the most part, a few limited areas of  the Precambrian Shield in central and northern Ontario, in particular Algonquin Park, the north shore of Lake Superior, and Algoma. Devoid of human presence, these works also eschewed the industrial development of the land that often existed just outside the picture frame. (14)

By falsely painting Canada as untainted by people and culture, the Group allowed the British settlers to lay full claim on the land without any inhibitions or guilt (see. fig 3). They overlooked the aboriginal population and their history with the land, as well as the technological advancement of that era, to paint a ‘new’ vision of Canada. Yet, they are a group of artists whose work largely contributes to how Canadian art and nationality is portrayed internationally. With the Group being the standard for Canadian art, my work has become a direct response to their paintings and the cultural divides they create.

To help myself with the goal of changing the way Canadian art and landscapes are viewed, I have continued my research by looking at the paintings and perspectives of other influential Canadian landscape artists. One of these artists is Emily Carr. She was painting Canadian landscapes at the same time as the Group. Although she was associated with them, Gerta writes that in her paintings, “aboriginal art seems to grow from the landscape”  (qtd. in  Marcia 276-77). Unlike the Group, Carr included Aboriginal Canadians and their marks as a part of the land, instead of excluding them to create a false vision of untouched wilderness (see fig. 4).

Along with Carr, there are many contemporary artists such as Monica Tap, Peter Doig, Gary Evans, Wanda Koop and Kent Monkman, who have started to influence the way Canadian art, as well as Canadian landscapes, are perceived. In all of their paintings, the signs of human occupancy are revealed, rather than concealed in the fictional wilderness. Tap explores the idea of time passing in her work by painting landscapes that are in between reality and abstraction from low-resolution video footage (see fig. 5); Doig paints magical, expressive and personal landscapes/dreamscapes of places he’s been to, including Canada where he spent his childhood (see fig. 6); Evans very directly challenges the way Canadian landscapes are traditionally viewed with his surreal paintings of suburban neighbourhoods (see fig. 7); Koop paints the tense relationship between human civilization and the natural world (see fig. 8), and Monkman upturns the hierarchy of colonizer and colonized by removing the Western gaze (see fig. 9). While the Group of Seven still play a dominant role in defining Canadian art and nationality, contemporary Canadian artists are pushing through with paintings that in no way resemble the Group’s.

With this quote by Carr in mind, I have started a loose series of works:

We may not believe in totems, but we believe in our country; and if we approach our work as the Indian did with singleness of purpose and determination to strive for the big thing that means Canada herself, and not hamper ourselves by wondering if our things will sell, or if they will please the public or bring us popularity or fame, but busy ourselves by trying to get near to the heart of things, however crude that work may be, it is liable to be more sincere and genuine. (qtd. in Morra)

Like Carr, I want to get to the heart of what makes up Canadian art. I believe it should be the colourful footsteps of the many cultural, and wholly unique identities that adorn the landscape – not the myths of wilderness. My current practice is fueled by the idea of culture, along with individual and national identity, as being inseparable from land. You may view my current series of work here: Toronto Marks, Multicoloured, Among Shades of White, Overcoming the Canadian Wilderness (Preliminary Studies), Toronto-scapes, Arts & Crafts and The Ignored Geniuses. 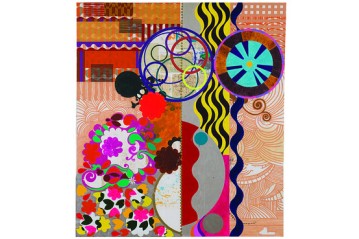 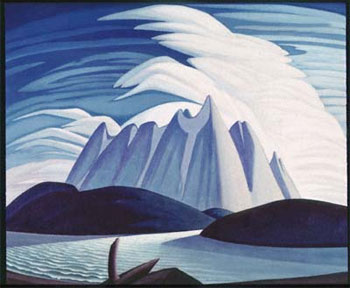 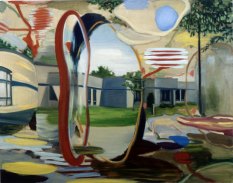 8 thoughts on “Overcoming the Canadian Wilderness”